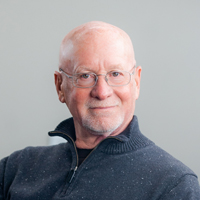 Christians and The World

Review the setting of Jn. 13-17: Jesus' final meeting with his disciples before the cross. Here, he explains the identity and purpose of his followers by detailing their key relationships:

In chapters 14-16, he explains the our unique relationship with the Holy Spirit (3 KEY ADVANTAGES).

In chapter 15, he explains our unique relationship with him and the Father (VINE, VINE DRESSER & BRANCHES: abiding).

Now, in chapter 17, Jesus prays for his followers. In this prayer, he explains another key relationship. It is unfortunate (and ironic, as we will soon see) that the NASB translates this passage into 17th century English. While people were struck by the personalness and informality of Jesus' communication with the Father, the translators have made it formal.

Read vs 1-13. Here Jesus says he knows his departure is at hand, and that his followers will be on their own. Read vs 14-20. Here Jesus prays for his immediate followers and us (vs 20). He is concerned about our relationship to the world (13 times in this chapter), that we have the right kind of relationship with it. His prayer sounds ambivalent--almost contradictory.

On the one hand, he says we are not of the world, and prays that we may be kept safe and separate from it (vs 14-17). This implies that there is something very evil and dangerous about the world.

On the other hand, he says he sending us into the world (vs 18). This implies that there is something very important and desirable about the world.

Christians often hear that we should be "in the world but not of it." This dictum comes directly from this passage. We need to understand this dictum, because our spiritual vitality and effectiveness are affected by this just as much as by the above relationships. Let's unpack it . . .

NOT OF THE WORLD

When Jesus speaks of the world in vs 14-17, he is referring to the satanic system which is hostile to God. The world (kosmos) in this sense is the enemy of God (see 1 Jn. 5:19). It is designed to distract and seduce people from a love relationship with God. How does it do this?

Read 1 Jn. 2:15-17. This system is antithetical to God, so loving it is incompatible with loving God. Notice that "the things of the world" are not things or people, but rather values:

"The boastful pride of life" refers to EGOTISM--living for self-aggrandizement and people's approval vs. living as a self-effacing servant for God's approval

Jesus prays in this passage that his followers will be different from the world ("sanctify") in the area of truth. In other words, we are to reject conformity to the world's beliefs, ethics, and values. We need to fight this battle on two fronts:

INDIVIDUAL CONFORMITY: I feel the constant pull toward HEDONISM, MATERIALISM, and EGOTISM. Don't you? What does it mean if a Christian says he doesn't feel this pull? Is this evidence of the Holy Spirit? Spiritual maturity is not having this pull disappear, but rather being more sensitized to it and coming to your senses more quickly. We also need to be willing to be different in this area, even if it means being rejected.

CORPORATE CONFORMITY: Sadly, the church often imitates and justifies the world's beliefs, ethics, and values, instead of being a light which exposes its futility and provides guidance for people in the darkness.  Because of this, we cannot blindly follow other Christians or denominations.

The key to resisting CONFORMITY is not censorship or monasticism; it is the truth revealed in God's Word (vs 17). But it doesn't operate like a magic potion, independent of our involvement. We need to take the time to learn the content of the Word, and then consciously evaluate every area of life in light of it.

When Jesus speaks of the world in vs 18, he is referring to the people who need to be reconciled to God (see also vs 21,23). The Father sent Jesus into the world to die for the people he loves. See also Jn. 3:16,17. What does it mean to be in the world in this sense?

Jesus was known as "the friend of sinners" because he loved them and hung out with them on their turf (Matt. 11). Likewise, Paul in 1 Cor. 5:9,10 was appalled by the idea that Christians would refuse to associate with sinful non-Christians.

FORTRESS MENTALITY ("Christians against non-Christians"): The church often communicates personal rejection of non-Christians because of their wrong beliefs and actions. It wrongly defines the enemy as people rather than as Satan and the world-system.

ALSO: While we need to protect our children in age-appropriate ways, we should also transmit this value lest they become self-righteous Pharisees!

We should practice cultural identification as much as we can without compromising doctrinally or ethically (FASHION; MUSIC; CINEMA; LANGUAGE; ALCOHOL; BARS; MEETINGS). People need to acknowledge their sinfulness and ask Christ for forgiveness, but they do not need to change cultures to come to Christ.

This was Paul's modus operandi (explain 1 Cor. 9:19-22), and it should be ours. There is not supposed to be any distinctively Christian culture!

ANTI-CULTURAL FUNDAMENTALISM: The church often is distinct from the world's culture, where it should be similar and involved. It often views cultural issues as though they are moral or doctrinal, when no such thing is at stake. The evangelical church has erected unnecessary barriers between Christ and the people he loves! A whole generation of people has been needlessly alienated from Christianity because of wrong thinking in this area!

We should refuse to accept the criticism "worldly" in this area. This is both superficial and profoundly unbiblical. We should be willing to stay in touch with our culture--even if this is a sacrifice--so we can more effectively reach the people in it.

I am afraid that some of us may have this area "bass-ackwards"--different from the world culturally and similar in beliefs, ethics and values (NO SECULAR MUSIC WHILE AWASH IN MATERIALISM; TEE-TOTALLERS WHILE GUILTY OF TRIBALISM)!

But Jesus speaks of something else we'll need if we want to be effective with the world . . .

Unity With Other Christians

Read vs 20-23. What is this oneness? He isn't talking about organizational unity (ECUMENISM is not desirable), or even functional cooperation between believing churches (although this is desirable wherever possible). He is talking about personal love relationships between Christians.

This unity mirrors the unity between the Father and Jesus. This is obviously a personal, relational unity, rather than organizational. Vs 26 also defines this unity as "the love you have for me."

This echoes Jesus' mandate in 13:34,35. In both passages, the result is effective witness to non-Christians. "Being one" therefore is the same as "loving one another as I have loved you."

The rest of the New Testament consistently describes this unity in terms of personal love relationships between Christians (see Eph. 4:1,2).

Our spiritual union with God should result in unity in personal love relationships. The world's root problem is alienation from God, and the primary symptom of this is alienation from other people. If we want the world to listen to us when we say we have found the way back to God through Jesus, we need to validate this claim by displaying relationships and community that work.

"The church that convinces people that there is a God is a church that manifests what only a God can do, that is, to unite human beings in love . . . There is nothing that convinces people that God exists or that awakens their craving for him like the discovery of Christian brothers and sisters who love one another . . . The sight of loving unity among Christians arrests the non-Christian. It crashes through his intellect, stirs up his conscience and creates a tumult of longing in his heart because he was created to enjoy the very thing that you are demonstrating. [1]

God has given us the resources for this kind of unity (HOLY SPIRIT; TRUTH; PURPOSE), but it doesn't happen automatically.

Have you begun a personal relationship with Christ?

Some of us are stuck because of our unwillingness to forgive . . .

Some of us are stuck at the starting line . . .